Bike geometry is a complex and fascinating issue. When a rider is looking for a new bike, geometry and size have to be considered so that the fit coordinates of the cyclist can be achieved on that particular bike. But a particular set of fit coordinates can be achieved by many different bike geometries, or by a combination of different components (steem, seatpost…). So, two bikes with exactly the same contact point coordinates (so, same size) but different geometry do ride the same? Probably not. Angles of the tubes do alter ride quality. For example, a fork with a slacker head angle flexes more and makes a more compliant bike. Vegetal fibers used in the construction of Axalko frames make the frames very compliant, but in other cases, if the material of the frame is not as compliant, a solution can be to add a suspension mechanism or to shallow the head angle. But, how does this affect other factors such as steering and handling?

It is not easy to know exactly how a bike is going to handle by knowing the geometry. But there are some concepts that we know do affect handling.

One of the first concepts to consider is that a bike wheel acts like a gyroscope, the faster it spins the more it wants to stay in the same plane. So, when a cyclist is riding a bike, the gyroscopic forces in the wheel make the bike more stable the faster it rides. At the same time, for the same rotation speed, the gyroscopic forces are higher the bigger the diameter of the wheel is, so a 700cc wheel bike is more stable than a 650cc bike, if the geometry remains the same.

The distance between the point of contact of the tyre with the surface and the point where the bike’s steering axis would cross said surface, this distance is trail of a bike.  The image below shows how trail can be modified:

Trail makes the bike want to go in a straight line, thus, the more trail a bike has the more self centering force it has.

Looking at the pictures, you can notice that wheelsize affects the trail of a bike. The smaller the wheel, the less trail it has, considering everything else equal. So, to keep the handling similar, a 650cc fork must take this into account. One solution is to make the head angle shallower.

A shallower head angle adds trail and also gives more wheelbase to the bike, which makes it more stable. At the same time, more rake also gives more wheelbase, but it has less centering force so it is less stable especially at higher speeds. Too much trail makes the bike very slow to turn, so there is a fine balance between stability and the ability to steer the bike correctly.

Weight distribution has to be considered when choosing size and geometry of a bike. If a cyclist rides a bike that is not the correct size, for example if it is too short and with less wheelbase than it should, then the weight of the rider is displaced forward. This is more evident when descending, the steeper the descent is the more weight is on the front wheel. This increases when braking. Weight distribution can be an issue in this case and it is solved by correctly choosing the size of the bike. In other cases, such as time trial bikes, the particular geometry (very steep seat angle) displaces the weight of the rider to the front of the bike. In this case, the solution is to add wheelbase to distribute the weight more evenly between front and rear wheels. This is achieved with a shallower head angle and, at the same time, with more rake, so that trail remains similar.

Components can also affect handling too. For example, the shorter the stem the less movement is needed to make a turn, so a longer stem makes precise steering easier.

When we design our bikes, all these things are carefully considered, but it’s not possible for us to know how each design will perform. That’s why we extensively test the Axalkos in the basque forests and roads that surround our factory in Zerain. And also, in our lab, we test and measure every frame that we produce. So that you can only ride the best quality. 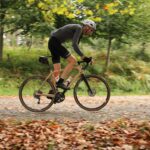 This author does not have any more posts.

You can find out more about which cookies we are using or switch them off in settings.

This website uses cookies so that we can provide you with the best user experience possible. Cookie information is stored in your browser and performs functions such as recognising you when you return to our website and helping our team to understand which sections of the website you find most interesting and useful.

Strictly Necessary Cookie should be enabled at all times so that we can save your preferences for cookie settings.

If you disable this cookie, we will not be able to save your preferences. This means that every time you visit this website you will need to enable or disable cookies again.

This website uses Google Analytics to collect anonymous information such as the number of visitors to the site, and the most popular pages.

Please enable Strictly Necessary Cookies first so that we can save your preferences!

Please enable Strictly Necessary Cookies first so that we can save your preferences!